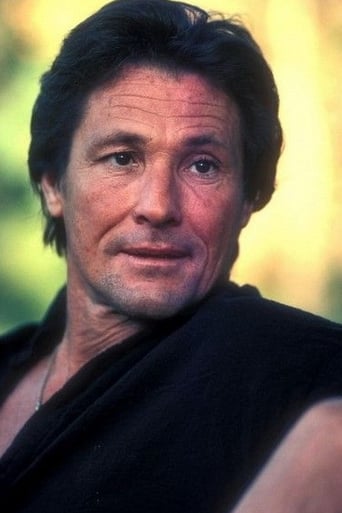 From Wikipedia, the free encyclopedia William Smith (born March 24, 1933) is an American actor who has appeared in almost 300 feature films and television productions. Smith began his acting career at the age of 8 in 1942. He is perhaps best-known for playing the sinister "Anthony Falconetti" on the TV miniseries Rich Man, Poor Man and its sequel, Rich Man, Poor Man Book II, both in 1976. The physically imposing 6'2" actor is a lifelong bodybuilder and has the distinction of being the final Marlboro Man before the cigarette ads were discontinued on TV. Smith won the 200 pound (91 kg) arm-wrestling championship of the world multiple times and also won the United States Air Force weightlifting championship. Smith is a record holder for reverse-curling his own bodyweight. His trademark arms measured 18 and 1/2 inches. Smith held a 31-1 record as an amateur boxer and studied martial arts with kenpo instructor Ed Parker for several years. Smith also played semi-pro football in Germany and competed in motocross and downhill skiing events. He entered films stunt doubling for former screen Tarzan Lex Barker in a French film. Smith earned a Bachelor of Arts from Syracuse and a Master's degree in Russian Studies from UCLA. He taught Russian at UCLA before abandoning his Ph.D. studies for an MGM contract. He also studied at the Sorbonne in Paris and the University of Munich while learning languages through the military. Smith is fluent in Russian, Serbo-Croatian, French and German. During the Korean War he was a Russian Intercept Interrogator and flew secret ferret missions over Russia. He had both CIA and NSA clearance and intended to enter a classified position with the U.S. government, but his marriage to a French actress meant the loss of security clearance. One of his best known roles is that of Joe Riley, a Texas Ranger on the NBC western series Laredo (1965-1967). Smith character was good-natured; co-star Peter Brown's character was a ladies' man, and Neville Brand portrayed a relentless bumbler. In 1967, Smith guest starred on Wayne Maunder's short-lived ABC military-western Custer. Smith played Jude Bohner in a 1972 two-hour episode of CBS's Gunsmoke as the "greatest bad-guy character actor of our time". Smith was added to the cast on the final season of Jack Lord's long-running crime drama Hawaii Five-O. He also starred in one episode of Kung Fu, and as the Treybor, a ruthless warlord, in the Buck Rogers in the 25th Century episode "Buck's Duel to the Death". Smith has also made guest appearances in numerous TV shows including the 1974 pilot for The Rockford Files, "Backlash of the Hunter", I Dream of Jeannie, and two appearances - as different characters - in episodes of The A-Team (the first season's "Pros and Cons", and season four's "The A-Team Is Coming, The A-Team Is Coming"). On film, Smith played Clint Eastwood's bare-knuckle nemesis Jack Wilson in Any Which Way You Can, as a drag racing legend in 1979's "Fast Company", as the barbarian's father in Conan the Barbarian, bad guy Matt Diggs in The Frisco Kid, as a Russian commander in Red Dawn and a vindictive sergeant in Twilight's Last Gleaming. For fans of John D. MacDonald's Travis McGee novels, Smith did a turn as chief heavy Terry Bartell in Darker Than Amber, opposite Rod Taylor and Theodore Bikel, in 1970. He also played Jed Clayton in Boss Nigger (1975) a blaxploitation film from the 70s which also starred Fred Williamson, and was seen in in Francis Ford Coppola's classic 1983 films The Outsiders and Rumble Fish as a store clerk and a police officer, respectively. But, his starring roles typically had titles such as Grave of the Vampire, Invasion of the Bee Girls, and The Swinging Barmaids. Smith also played in several biker flicks including C.C. and Co., where he starred as the menacing "Moon", opposite football great Joe Namath and Ann Margret. He also starred in Nam's Angels, which is briefly seen on a television in a scene in Quentin Tarantino's film Pulp Fiction. Description above from the Wikipedia article William Smith (actor), licensed under CC-BY-SA, full list of contributors on Wikipedia.