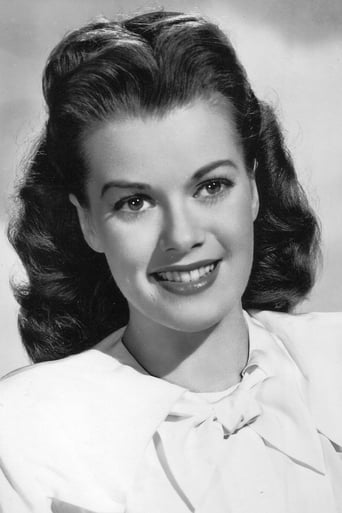 From Wikipedia, the free encyclopedia. Janis Paige (born as Donna Mae Tjaden, September 16, 1922, Tacoma, Washington) is an American film, musical theatre and television actress. She began singing in public from the age of five in local amateur shows. She then moved to Los Angeles after graduating from high school and then got a job as a singer at the Hollywood Canteen during World War II. The Canteen, which was a studio-sponsored gathering spot for servicemen, is where Warner Bros. saw her potential and signed her up. She began her film career co-starring in secondary musicals, often paired with either Dennis Morgan or Jack Carson. She later was relegated to rugged adventures and dramas in which she was out of her element. Following her role in the forgettable Two Gals and a Guy released in 1951, she decided to leave the Hollywood scene. She then took to the Broadway boards and scored a huge hit with the 1951 comedy-mystery play, Remains to Be Seen, co-starring Jackie Cooper. She also toured successfully as a cabaret singer, performing everywhere from New York City and Miami to Las Vegas and Los Angeles. Stardom came in 1954 with the role of "Babe" in the Broadway musical The Pajama Game. (Doris Day went on to play the role on film.) After a six-year hiatus, Paige returned to films in Silk Stockings (1957), which starred Fred Astaire and Cyd Charisse, plus the Doris Day comedy Please Don't Eat the Daisies (1960) followed by a role as a love-starved married neighbor in Bachelor in Paradise with Bob Hope (1961). One of her rare dramatic roles was "Marion," an institutionalized hooker, in the 1963 drama, The Caretakers. Description above from the Wikipedia article Janis Paige, licensed under CC-BY-SA, full list of contributors on Wikipedia.